LABORATORY OF CONVERSION OF ENERGIES AND ELECTRONICS OF POWER 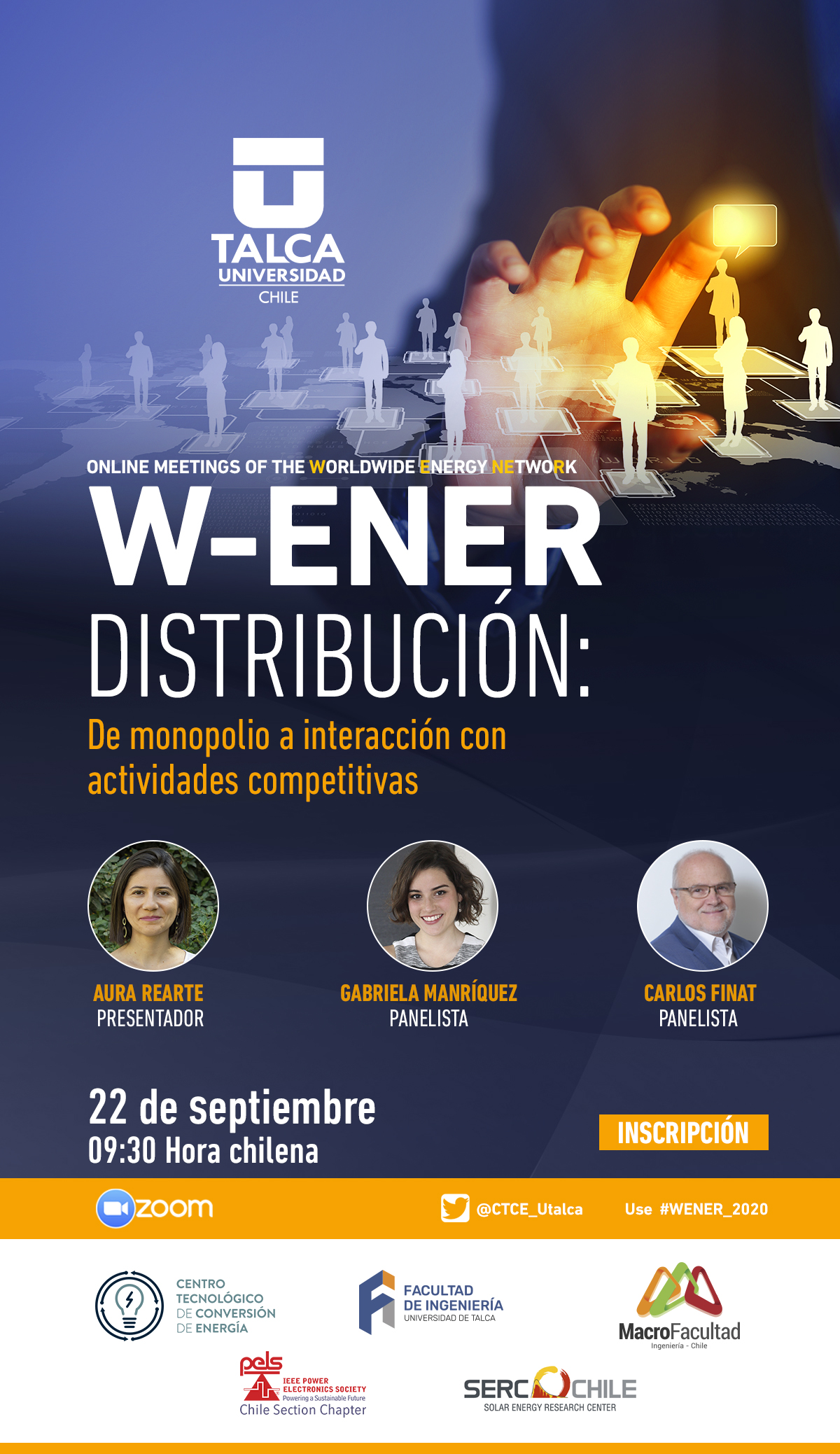 The CTCE is pleased to invite you to the next session of the W-ENER for September 22 at 9:30 a.m. Chilean time, by Aura Rearte

The talk will be in Spanish and will be entitled Distribution: from monopoly to interaction with competitive activities.

We leave you the synopsis and biography of the panelists.

Synopsis: Description of the bill that modifies the distribution segment, in addition to actions already underway regarding the same matter.

Civil Electrical Engineer with more than 6 years of experience in the electric power regulation market, especially in distribution, distributed generation, network expansion, planning, technical standards and their compliance. Responsible for the preparation and publication of technical standards that regulate the connection and operation of distributed generation (Netbilling and PMGD), medium systems, Central Interconnected System standards, compensation, among others. Leader of processes to create / modify regulations and part of teams for legal modifications, today actively working on the modification of the distribution segment. In 2019 it publishes the modification to the instrument that is the basis for the pricing of the distribution network. Responsible for the declaration process under construction between 2015 and 2017. Constant relationship with industry stakeholders for the development of the electricity market regulation.

Carlos Eugenio Finat Díaz
Executive Director
ACERA
He is a Civil Electrical Engineer from the University of Chile. He has a long career in the energy, mining and ICT industries.
At the end of 2008, he joined Compañía Minera Doña Inés de Collahuasi, where he held the positions of Manager of Strategic Supplies, Manager of Energy and VP (I) of Administration and Services. Between 2009 and 2012, he was a member of the Board of Directors of the CDEC-SING on behalf of free clients and served as Chairman from 2011-2012. In September 2012, he joined ACERA A.G.
He was a member of the Scenarios Construction Group of MAPS Chile, formed part of the Energy Advisory Council 2050, from which the Long-Term Energy Policy was born. He is currently a member of the External Advisory Committee (CAE) of the Department of Electrical Engineering of the University of Chile and is part of the Advisory Committee of the process of updating the Long-Term Energy Policy.

National Energy Commission, Regulatory Legal Advisory Unit. Preparation of proposals for legal and regulatory modifications in matters related to the electricity market.
2018- 2019:
Ministry of Energy, Division of Energy Markets, Electric Unit. Integration of teams to draft laws related to the distribution segment, rate stabilization for regulated clients, and flexibility strategy. Committee for modification of the Technical Distribution Norm, interpretation of the electricity sector regulation and specialization in free competition.

Know where they are headed Laboratory investigations.

Learn about the emblematic projects of the LCEEP.

Know the institutions with which you relates the laboratory.

Knows the events related with the one LCEEP.