5th Version of the Symposium on Renewable Energies, ENER17 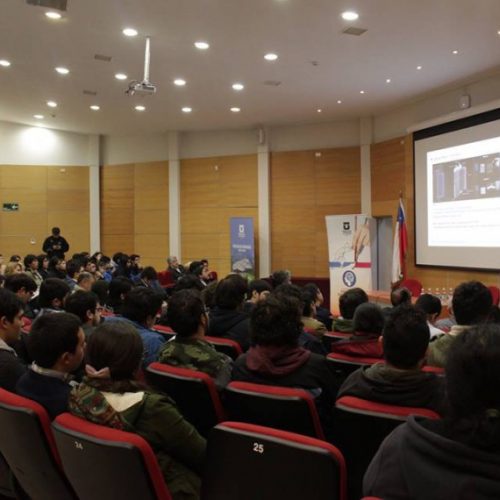 In the Curicó Campus of the University of Talca, the Fifth Version of the Symposium of Renewable Energies, ENER17, took place, which was attended by leading academics and specialists from Latin America, Europe and Oceania.

There were two days in which academics, students, professionals of the world of engineering, representatives of the public and private sector, met to talk, share experiences and learn about the latest trends in innovation, at the Fifth Symposium on Renewable Energies, event that It has established itself as one of the most important at national level in energy matters.

ENER17, an event organized by the Power and Power Electronics Conversion Laboratory with the support of the MacroFaculty of Engineering, in addition to addressing the latest trends in renewable energies, in this version had a focus on power electronics, which allowed attendees to know new technologies and innovations related to stabilize the transformation and distribution of renewable energies in electricity, this being one of the main gaps found in the use of these systems.

In this context the academician of the LCEEP and organizer of the day, Marco Rivera, explained that, “The Government has been encouraging the penetration of renewable energy systems in the energy matrix due to the growing demand of energy by the industry and the community, for this reason is of utmost importance that the University of Talca take a leading role in this area, because without the power converters the renewable energies do not help us at all, since it is these equipments that makes the connection interface between the generation system and the user “.

It should be noted that the Energy Fair was held within the framework of the symposium, in which attendees learned about the work being carried out in the public and productive sectors, as well as at the University of Talca, on renewable energies, contemplating also a visit to the laboratories of the Faculty of Engineering.

In addition, the dean of the Faculty of Engineering UTalca, Claudio Tenreiro, highlighted the work done by a group of potential electronics academics, who are doing a work of international level, “They are joined by researchers from various specialties of the engineering, those who are executing initiatives related to renewable energies and the environment, which has allowed to enhance these issues, contributing not only in the sciences but also contributing to problems of the community and companies “, concluded the Dean.